The news is by your side.

A Birthday Celebration for the Ages: Scientologists From 70 Nations Gather to Honor Founder L. Ron Hubbard 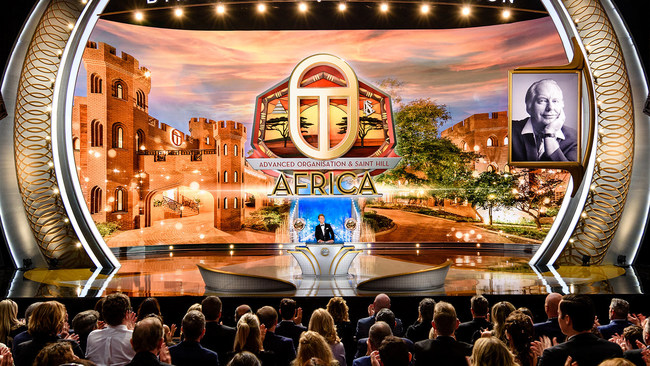 CLEARWATER, Fla., March 14, 2019 — The klieg lights. The red carpet arrivals. The photographers capturing the moment. The excited chatter in a multitude of languages. The bustle and buzz. Thousands came from 70 nations, converging at Ruth Eckerd Hall in Clearwater, Florida. Decked out in gowns and tuxedos, they were ready to party. It was the marquee event in an annual weekend-long birthday celebration for the religion’s founder, L. Ron Hubbard (LRH). And there was a whole lot to celebrate, from a history-making grand opening to a string of church successes spanning the globe and a sneak peek inside the Scientology Network’s next season — all of it underscoring the scope of Scientology expansion.

The night launched off with a virtuoso musical performance that had attendees on their feet and which signaled that this extraordinary evening would supply untold adventure. Indeed, it was the world-class introduction to the moment when the ecclesiastical leader of the Scientology religion, Mr. David Miscavige, took the stage amidst thunderous applause and a prolonged standing ovation.

“Welcome to the night we honor our founder. Not that you have never made his acquaintance. But as this is a night to do the formalities, let’s begin with a few basics. This past year saw new churches of Scientology in every geographic zone, new facilities for forward strides across entire continents, not to mention a brand-new year — 2019 — that will never be forgotten even though it’s just begun. In short, our expansion is staggering and, of course, it all wells up from the life and legacy of one man — L. Ron Hubbard.”

And that life and legacy have left an indelible mark on the world. He was born on March 13, 1911, and as his biographer Dan Sherman made clear in his presentation, L. Ron Hubbard was a man who recognized the humanity in each inidual he met, focusing on them in a way that left a lasting impact. Mr. Sherman took the audience on a journey that spanned five decades, for a series of days in the extraordinary life of L. Ron Hubbard, interweaving video interviews with people who were forever changed just by crossing his path.

The presentation began 300 feet above Midwest cornfields where a 20-year-old barnstorming pilot named “Flash” Hubbard showed local residents, including a nine-year-old model-airplane enthusiast, what it meant to fly. That boy — now a grown man — recalled how, after landing in a cow patch, the young pilot gave the curious residents — one after another — the chance to soar above the fields. It was an occasion that made such an impression on townspeople that it was commemorated half a century later with L. Ron Hubbard Day.

Mr. Sherman next set the scene in a hilltop writer’s retreat above Port Orchard, Washington, where Mr. Hubbard penned his first novel, a story about the Blackfoot Indians. The audience heard from another witness to history, a Blackfoot representative who as a young man met L. Ron Hubbard in that cedar-lined cabin where he talked about his novel “and made the story come alive.” It was, he said, “a red-letter day.”

Mr. Sherman’s snapshots into the life and insights of L. Ron Hubbard also included stories from a gentleman inspired to pursue a career in science because of his boyhood conversations with the man who rescued him from a hurricane in New Jersey and another who vividly recalled his teenage days as a diner busboy, culminating in a life lesson about the importance of education that he took to heart, thanks to a generous customer who befriended him, named Mr. Hubbard. Mr. Sherman concluded his presentation in California’s Gold Country in the 1980s, delighting the audience with an interview of a young woman from Sears Roebuck who answered a sales call at Mr. Hubbard’s home and experienced a golden afternoon that she would never forget: “When you meet someone that significant, they leave a very special impression on you.”

The evening then fast-forwarded to 2019 and an awards ceremony that underscored the spirit of the night — a celebration of expansion. More than 40 years ago, LRH was asked what he wanted for his birthday. His answer was the gift of Scientology orgs and missions flourishing in the name of delivering spiritual freedom. Over the years, Scientology churches around the globe have made a game out of it, competing in one of four leagues, racing to the finish line. This year, the champions stepping into the winner’s circle each achieved record-breaking performances. They are the Scientology Mission of Ulm, Germany; the Church of Scientology Stuttgart, Germany; the Advanced Organization & Saint Hill United Kingdom; and the Continental Liaison Office of Europe.

All the fanfare and excitement set the stage for the evening’s ultimate recognition of Mr. Hubbard’s legacy. “Indeed, we come to the culminating chapter of this 2019 Birthday Game,” said Mr. Miscavige. “So while you have undoubtedly heard tell of it and possibly even witnessed it, the time has come to set down the facts.”

And just like that, Mr. Miscavige next presented the crowning achievement of this year’s expansion, the opening of the first new Advanced Organization in over 35 years. The historic dedication of a majestic castle overlooking 22 acres of highveld made the advanced spiritual levels of Scientology available for the first time on African soil and thus was the realization of a dream first expressed by Mr. Hubbard over 50 years ago. The presentation chronicled a series of epic celebrations, from the magnificent grand opening, which national dignitaries hailed as an “awakening of our beloved Africa,” to a monumental gathering of tribal chiefs. Within days of opening, the castle hosted a “Summit of Thrones” convocation of 14 monarchs from five African nations. The event’s guest of honor, Queen Shebah III, Empress of the Royal African Kingdoms, recognized L. Ron Hubbard for finding “the means to unite all kingdoms and peoples from this cradle of Africa.”

Finally, all eyes turned to the giant television screen for an exciting and entertaining presentation that focused on a game-changing area of expansion, this time over the airwaves. Just 12 months ago, the religion flipped the switch on the Scientology Network, bringing the voice, the story and the message of Scientology to the world — unfiltered, unabashed, unlike anything on television. And the industry has taken notice, honoring the station with over 30 awards for outstanding programming, the five latest recognizing L. Ron Hubbard, the autobiographical series L. Ron Hubbard: in His Own Voice and L. Ron Hubbard Library Presents — his groundbreaking writings illuminated on film. Accordingly, Mr. Miscavige captivated all in attendance with an audiovisual preview of what’s in store for the Scientology Network’s “Year Two.”

As the spectacular birthday party came to a close (with a giant cake, of course), the joyous crowds moved on to the Flag Land Base where the celebratory atmosphere was on display all weekend. From the historic Fort Harrison to The Oak Cove and Sandcastle retreats, all facilities were filled to capacity with visiting Scientologists attending planned and impromptu gatherings throughout the multitude of Flag’s Seminar and Conference Centers.

The festivities culminated with the annual Flag Patrons Ball, an International Association of Scientologists (IAS) gala acknowledging those members whose efforts support Scientology humanitarian initiatives that benefit millions the world over.

It was a weekend defined by a shared spirit of celebration and of hope inspired by Mr. Hubbard that mankind can realize an inherent greatness and fulfill his long-sought dreams. Mr. Miscavige summed that collective spirit when he said:

“LRH tells us we are only as alive as we still cling to dreams.

“And, while we cannot fulfill those dreams in a single breath, we nonetheless possess the technology to eventually make them come true.

“While, even more than that, we possess the means to fulfill that most enduring dream of every spiritual being, which is total spiritual freedom — and which is both our beginning and our end.”

And with that, a 108th birthday celebration ends and another 12 months of inspiration begins — and considering the impact and influence of L. Ron Hubbard continues to grow and grow, this next year is set to be full with extraordinary success and adventure.

mr-david-miscavige-the.jpgMr. David Miscavige, the ecclesiastical leader of the Scientology religion
Mr. Miscavige welcomes attendees to the annual celebration at the Ruth Eckerd Hall in Clearwater, Florida. And there was a whole lot to celebrate, from a history-making grand opening to a string of church successes spanning the globe and a sneak peek inside the Scientology Network’s next season — all of it underscoring the scope of Scientology expansion.

the-historic-dedication-of-a.jpgThe historic dedication of a majestic Castle
Mr. Miscavige presents the crowning achievement of this year’s expansion, the opening of the first new Advanced Organization in over 35 years. The historic dedication of a majestic castle overlooking 22 acres of highveld made the advanced spiritual levels of Scientology available for the first time on African soil.

scientology-network-year-two.pngSCIENTOLOGY NETWORK YEAR TWO
The network’s upcoming season is set to launch later this spring with all new episodes taking viewers across six continents and the erse activities of the religion, its members and their countless partners in the pursuit of a better world.